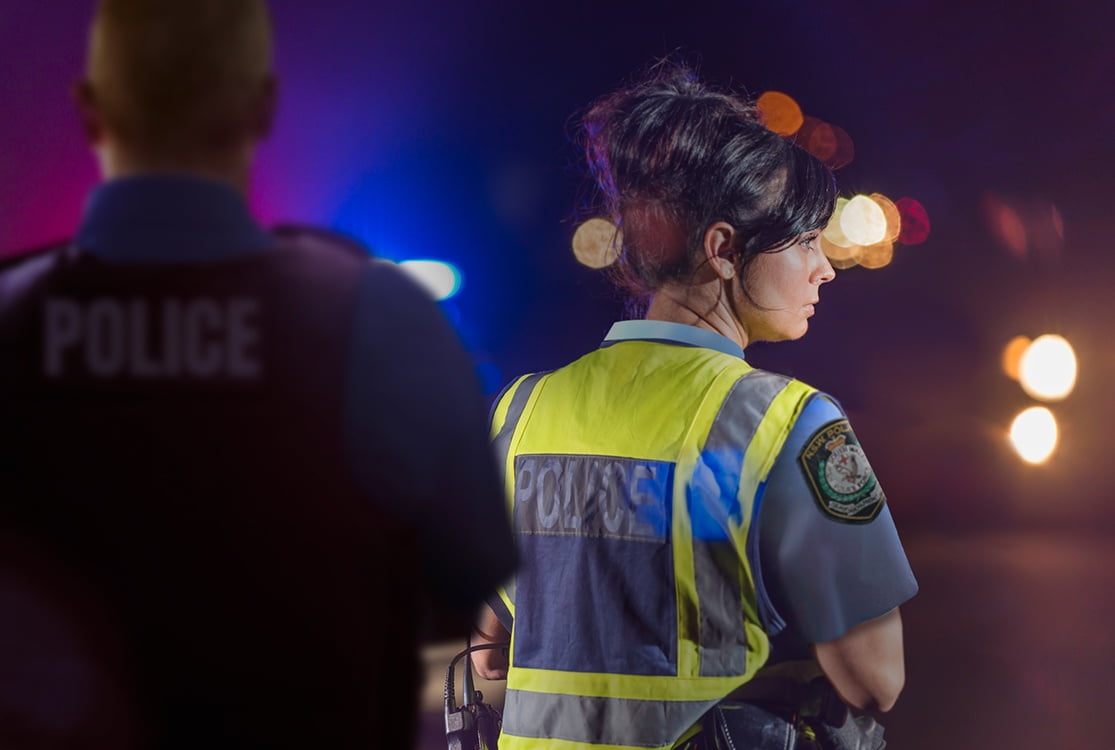 There is little to no published information on the culture of abuse within the ranks of the police force – until you really start digging.

And then you uncover the horrific stories of abuse and harassment, as well as the evidence that the police force understands there is an underlying culture of sexual harassment and discrimination within the force.

Studies into abuse within the police force

There is a 2015 study by Victoria’s Equal Opportunity and Human Rights Commission (VEOHRC) into the issues of discrimination and abuse within the police force.

There was also a 2007 study into workplace culture within the NSW Police Force.

So many studies – yet cops and those working within the police force are still subject to workplace harassment and discrimination.

Of the 5,000 individuals surveyed in the Victorian study, 40% of women experienced sexual harassment. Only 11% of police officers who were sexually harassed filed an official complaint.

This number further enhances the issue of cultural silence in the face of abuse within the police ranks.

Putting this into perspective: more women have been harassed in the Victorian Police Force than in the entire Australian Defence Force.

There have been several news articles on this study including this article from The Age which stated the Victorian Police Force had “Investigated 184 complaints of sexual misconduct, including rape, against police (about 100 have been resolved and about 80 are active).”

The shocking numbers of Victorian Police bullying and harassment indicate the sheer volume of abuse that is still tolerated within the police force. The individuals targeted are police officers – those who have dedicated their lives to protecting society from the abuse and torment they suffer in their jobs.

This study found one in four individuals who complained were victimised. Our police officers, who put on their uniform every day to protect our society, are being tormented by their own colleagues. 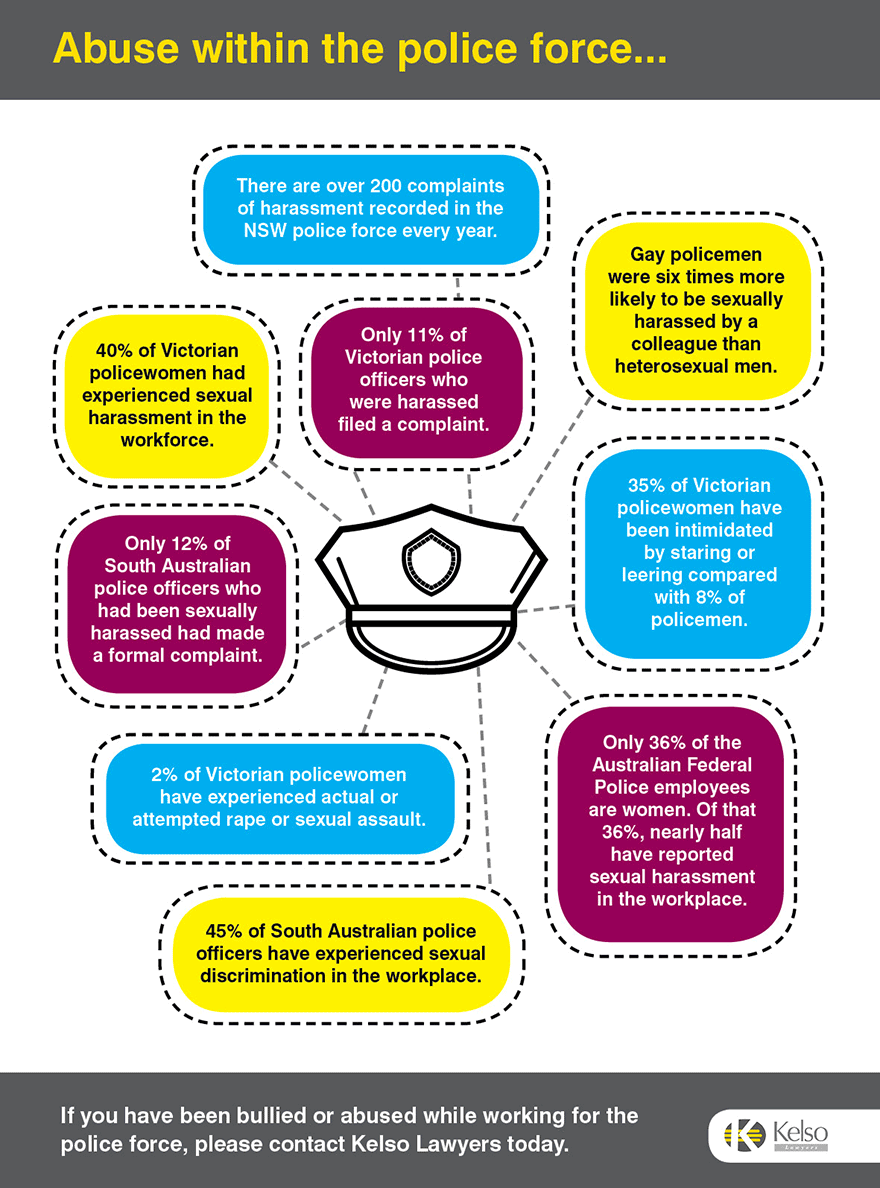 The victims of police abuse are victimised for speaking out

Victims lose their identity – it’s the price they pay for speaking out to the media.

One victim, Jen*, was harassed by her colleagues when she began working as a detective. She was new to that particular office. Her colleagues started by making inappropriate comments about the clothes she wore.

“This white one, there’s a white long-sleeved one, it would have been winter, this one here was when the colleague said that I have massive boobs in them, or am I wearing a push up bra.”

Jen was subjected to continual sexual comments about her appearance in clothes, or changes to her hair colour. One colleague once pointed to his crotch and said, “Hey, suck it.”

This is a direct contradiction to the NSW Women in Policing Strategic Plan, which has a key objective of “Developing an inclusive workplace culture that supports and promotes women in policing”.

The culture of misogyny and sexual harassment is so normalised in the police force, even police officers struggle to separate what is acceptable, and what is inappropriate discussion in the workplace.

And it’s not just women who are victims of serious sexual harassment in the workplace.

Gay and lesbian individuals suffer from bullying in the police force

In late 2017, a story came to light about a group of gay police officers who were subject to continual harassment and even an internal inquiry as a result of their sexual orientation.

The six-month investigation included regular drug testing at the request of their superior Superintendent Simon Hardman. His justification? The men had attended a gay venue.

Another man – whose name has also been changed for privacy reasons – was a new police officer, who walked into the station on his very first day, only to be questioned about his sexuality.

“I was standing in the muster room. And as all the cops were silent and the information was being passed over, one of my sergeants said to me, he said, ‘You’re gay, aren’t you? We don’t care if you are, but you’re gay aren’t you?’ I was petrified and embarrassed.”

Chris’ supervisor made a point of his homosexuality, on Chris’ very first day as a police officer on the NSW police force. The harassment only escalated, leaving Chris suicidal and anxious in under 12 months working in the force. Chris’ boss told him not to make a formal complaint of the harassment.

Chris since transferred away from the station.

No one should feel like they need to leave their jobs in order to feel safe at work. No one should have to sacrifice their career and livelihood because of harassment in the workplace.

No one should ever feel humiliated at work.

If you were emotionally, sexually, or physically abused by a fellow cop or cops, please contact Kelso Lawyers today. We want to hear your story and help. 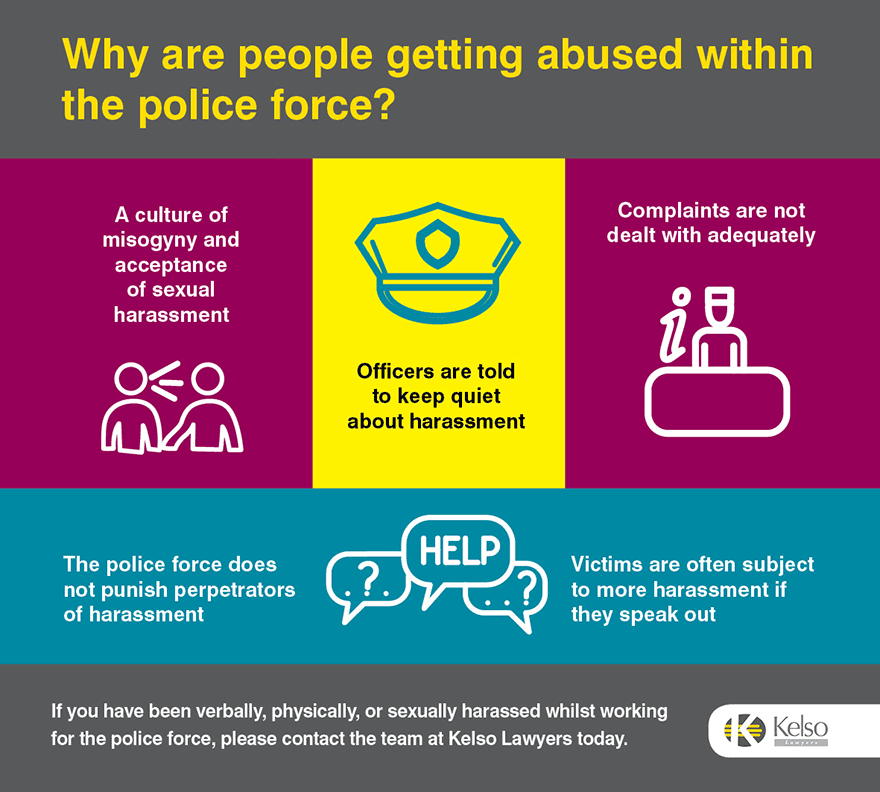