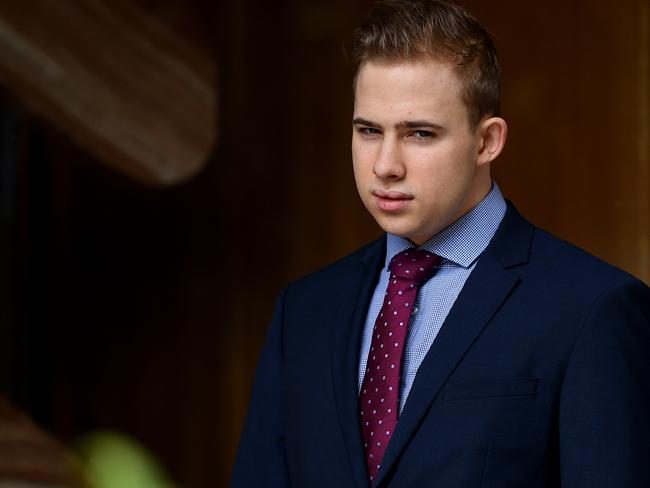 Court proceedings against 22-year-old swim teacher, Kyle Daniels, have continued with a video interview between police and one of Daniel’s underage victims.

Nine young girls have accused Daniels of touching them inappropriately during swimming lessons at Mosman Swim Centre between 2018 and 2019. The 26 charges include sexual intercourse with children under the age of 10. The youngest was just six-years-old at the time of the abuse.

The child was interviewed on camera by police in 2019. At first, she smiled while talking about her hobbies and the things she likes, including swimming and sports. However, her demeanor changed when the detective asked about Daniels.

She said Daniels touched her inappropriately on two separate occasions. Both instances occurred in the same swimming lesson.

“Where did his hands go?” the detective asked her.

The child put her head in her hands and said “the place that you’re not supposed to touch.”

She did not want to verbalise what “the place” was but later wrote down “vagina” on a slip of paper.

She told the detective she went home after the swimming lesson and wrote a note to her parents about what had happened. Her voice cracked multiple times during the interview.

She also told the detective it was probably an accident. She said she couldn’t imagine why someone would want to touch another person there.

Another two girls were also interviewed about Daniels. One of the girls said she was practicing kicking on her back when Daniel’s pushed her private parts “hard and it hurt.” She also said it “felt like a worm” inside her private parts.

Her older sister also had a similar experience.

It was the two sisters’ allegations that led to Daniels’ arrest in 2019.

Daniels denies all of these allegations.

While the former jury was discharged in late October 2020, the trial continues. More on this to come.

Dozens of men across Australia have been arrested and charged for the possession and production of child abuse material.

This follows a 12-month Australian Federal Police (AFP) investigation across all states and territories. Dubbed Operation Molto, the investigation has led to more than 350 arrests across the country.

The investigation started when police were alerted to a cloud-based storage platform used by thousands of people worldwide to share “abhorrent” child abuse material.

Law enforcement personnel, hospitality workers, and builders were among the offenders. The age bracket was between 19 and 57-years-old. Victoria and Queensland have seen the most arrests with 11 charged in each state.

The AFP has also removed 16 children from harm across the country. The AFP Commissioner described it as “a race against time” to save children from further abuse.

“Pixel by pixel, our investigators painstakingly look for clues and never give up,” Commissioner Kershaw said.

“The tools they use give Australian police access to world-leading expertise.”

Operation Molto brings the total number of children rescued from harm as a result of AFP investigations to 134 children – 67 in Australia and 67 overseas – between July 2019 and June 2020.

In October 2020, a 26-year-old Belgian tourist was charged with a number of child sex abuse offences in a Sydney Court.

It was revealed the tourist funded his “dream holiday” in Australia by selling “packs” of exploitative child abuse material online, stacking up to $US19,000 in profits before having the material taken down.

The packs included images and videos of children being abused across the world. He was selling them for around $US50 each.

Loyson flew into Australia from Thailand in November 2018. He told border officials he was going on a three month holiday.

In April 2019, Loyson was arrested at a Sydney Youth Hostel by the Australian Federal Police (AFP).

The AFP discovered Loyson had two bank accounts – one in Australia and one in Germany. He also had a drone, scuba diving gear, and camera equipment valued at almost $60,000. These have been confiscated by the AFP. Under new laws, the confiscation of funds and goods could be permanent.

“If a child sex predator is profiting from – or involves their property in – their criminal activity, their home, vehicle, bank accounts and other assets are at risk of being restrained and confiscated,’‘ AFP Stefan Jerga told the media.

“Thanks to the tenacious work of the Sydney child protection team, a man has now been convicted for trading in the exploitation of children, and we have taken steps to take back the money he made from this abhorrent venture.”

“Every image being shared and bought on this website was of a child being abused. Bringing these offenders from online anonymity to jail time is what drives the AFP to keep children safe.”

Loyson will spend a maximum of four years in jail.