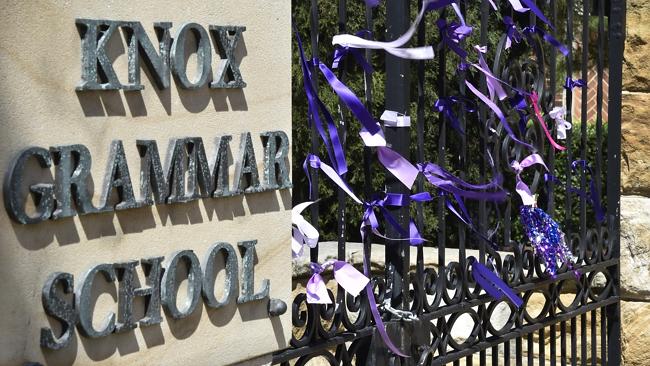 Over two weeks in 2015, the Royal Commission heard shocking evidence revealing the dark history of child sexual abuse and cover-ups at the prestigious Knox Grammar School.

Victims and their parents gave evidence of the abuse and the devastating impact it had on so many lives.

In total, eight former teachers were named as either convicted or alleged perpetrators of child sexual abuse during a period spanning from the 1970s up until 2009.

The hearing was unique in the fact that three convicted pedophiles were called to give evidence.

Two of the three witnesses were cross-examined leading to widespread media interest.

However, all eyes turned to the third witness, Chris Fotis, when Counsel Assisting announced that he failed to respond to the summons to appear. A failure to obey a summons from a Royal Commission is a federal offense and this lead to a warrant being issued for his arrest.

They found Fotis working as a tennis coach at Nelson Bay.

Dr. Ian Paterson was headmaster from 1969 to 1998. As the hearing went on and witnesses gave evidence, it became increasingly obvious that Paterson had seriously neglected to respond appropriately (or at all) to allegations of abuse on his students.

Paterson was cross-examined over two full days revealing numerous instances of abuse cover-ups and abject failures by the headmaster.

The Commission heard that when a boy awoke in his dorm to find a man dressed in a Knox tracksuit and balaclava sexually assaulting him, Paterson immediately suspected that the perpetrator had been resident master, Chris Fotis.

Instead of contacting police, Paterson lied to students and teachers, telling them that a mentally deranged Asian man had been arrested for the assault.

The Commission also heard evidence that two paedophile teachers, Damien Vance and Chris Fotis, were given glowing references by Paterson when they were eventually asked to resign due to allegations of sexual abuse.

The Commission heard that Paterson promoted Adrian Nisbett to housemaster of one of the dormitories when it was known to him that Nisbett had groped boys on the genitals.

Paterson told Nisbett to be “careful of his touching habits of boys.”

When a senior member of staff reported to Paterson that one of the teachers, Craig Treloar, had been caught showing pornography and sexually propositioning a boy in his bedroom, Paterson resolved the incident as “a silly mistake” and allowed Treloar to retain his position as a teacher in the prep school.

Treloar went on to abuse numerous other boys, eventually resulting in a conviction and prison sentence.

In the witness stand, Paterson attempted to explain his actions, stating that he had not considered groping of genitals to be child abuse.

He also said that the option of contacting police had never entered his mind, denying the obvious conclusion that he was mainly interested in protecting the good name of the school.

In the late 1980s, child protection laws were introduced, making it a legal requirement for mandatory reporters to notify police or DOCS of suspected child abuse. Paterson denied any knowledge of these laws, despite his position as a longstanding and experienced headmaster in a large school.

In 1996, an officer from the Child Protection Enforcement Agency met with Paterson to inform him of her investigation into several former and current teachers.

In cross-examination, Paterson admitted to the Commission that he had provided the officer with misleading information.

When Paterson was advised that a former student was preparing to commence a civil action for child sexual abuse by a current teacher, Barrie Stewart, Paterson admitted to the Commission that he attempted to hide evidence in the hopes that the matter would just go away.

Witness Lucy Perry provided evidence that in 1989 when she was 15-years-old and a student at a nearby girls school, Paterson groped her bottom and genitals in front of a group of male students during rehearsals of a school play. Paterson outright denied the allegation in cross-examination.

An older boy later provided evidence to the Commission corroborating Ms. Perry’s testimony, stating that he had witnessed the assault.

In 2009, a police task force was created, leading to the convictions of teachers Barrie Stewart, Adrian Nisbett, Craig Treloar, Damien Vance, and Roger James. Under new leadership, the school has made formal apologies and paid compensation to a number of victims.

Paterson has since attempted to recant some of his evidence given under oath to the Royal Commission. His name has been removed from school buildings; the once venerated headmaster is now a public disgrace.