He was one of Australia’s leading Catholics.

He was the Archbishop of Melbourne.

And he covered up sexual abuse.

Frank Little was in charge of the Melbourne diocese from 1974 to 1996.

He trained at Corpus Christi College in Werribee (the same college as George Pell). He was ordained as a priest in 1950 and worked in various Victorian dioceses.

Frank little is well known as a paedophile enabler, covering up the horrific crimes of his priests, and shifting them from parish to parish.

In his 22 year career as Archbishop, Frank Little was well established as a character who protected his priests, no matter their proclivities for abusive and illicit activities.

There are many stories of Little covering up abuse.

One such case is that of Father Russell Vears.

After parents alerted Little of the suspected crimes, he concealed the crime for thirty years, until the victim approached the police. Vears abused children in his parish, and when confronted by the parents became aggressive and defensive.

He was protected by the church, even though the Archbishop was aware of the crimes. Vears was not removed immediately after parents confronted the Archbishop. He even confronted the mother of the victim after Mass one Sunday and continued sexually abusing the young boy.

Little simply relocated Vears to another parish a short while later.

This is not the only case of Frank Little ignoring cases of sexual abuse.

In the 1980’s, a priest at the Holy Family Primary School in Doveton was sexually abusing children.

He was known to carry a gun around the school, show children dead bodies and once killed a bird in front of children.

His name was Peter Searson.

Parents and even children wrote to Frank Little, who was then the Archbishop of Melbourne. He did nothing,

He even went as far as to respond to the letters suggesting they bring their concerns directly to Searson first.

Little was a coward, preferring to hide behind the issue instead of facing it head on. His priests were a higher priority than his parishioners. 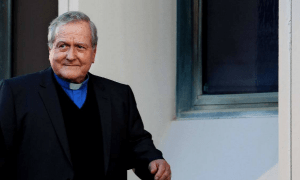