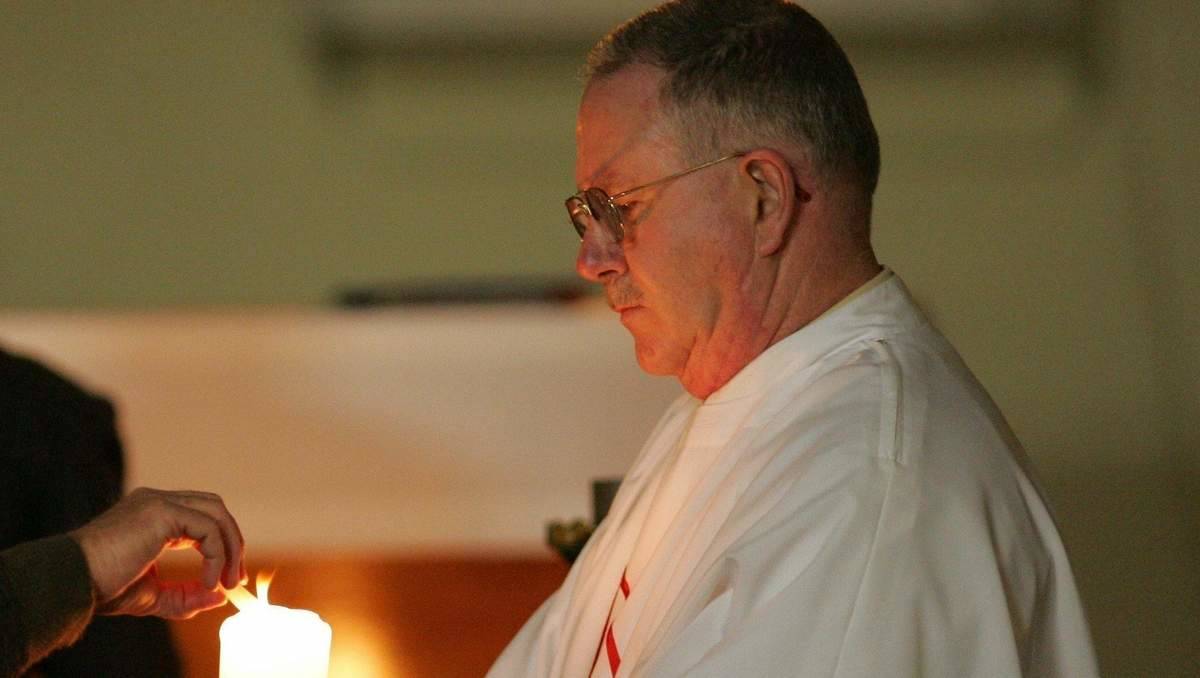 In cases of child sexual abuse, the child should always be listened to and believed.

However, in the case of the Catholic Church, it was usually the priest’s word over the victim’s and their crimes would often be concealed to maintain the reputation of the church.

Father Guy Hartcher was one of many priests who benefited from this horrendous trend in the Catholic Church. Hartcher abused three teenage boys at St Stanislaus College in Bathurst, New South Wales, in the 1970s.

He was never convicted of his crimes.

Instead, the Vincentian Fathers religious order paid off a survivor to keep quiet and never sue the church again.

Bishop Michael Malone then concealed this information from parishioners. Hartcher was allowed to go about his business unpunished. It was only when the media found out about Hartcher’s history in 2006 that he was given some form of punishment – a mere slap on the wrist compared to the seriousness of his crimes.

In this article, we shine a light on Hartcher’s dark, disturbing history, from the abuse at St Stanislaus College to his comfortable and undeserved retirement in Ashfield. Read on.

Hartcher was not always a priest, but he was always a member of the Vincentian Fathers religious order (also called the Congregation of the Mission).

In 1971, he completed training to become a Vincentian priest and got a job teaching at St Stanislaus College in Bathurst, New South Wales.

He would have been 24-years-old at the time.

In 1974, the Vincentian Fathers organised for Hartcher to go overseas. He studied at the Catholic University in Washington DC.

In the 1970s and 1980s, he also spent time at the Holy Cross College in Dunedin, New Zealand. Finally, he was listed as the rector of the Catholic Church’s St Francis Xavier Seminary in Adelaide, South Australia, in the 1994 Australian Catholic Directory. 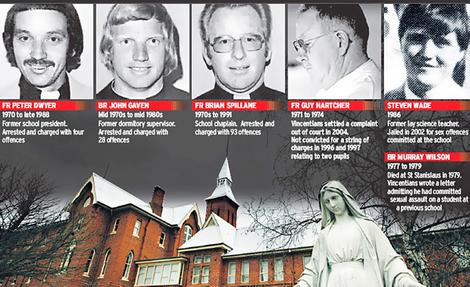 A victim is known only as “John” was abused when he was just 14-years-old at St Stanislaus College. Over time, John realised St Stanislaus (otherwise known as “Stannies”) was a hunting ground for paedophile priests, teachers, and staff members.

“We were all just kids at Stannies, a real smorgasbord,” he said.

He also called the boarding school a “paedophile paradise”.

John recalled priests grooming students with pornographic material. Sometimes, the boys would hide from offending staff members in the school’s hallways. The boys felt like they were being hunted – fresh meat for the taking.

John also mentioned a teacher who was nicknamed “Toad” who would grab the students by the genitals when they answered questions wrong in class. It was a notorious and common punishment for the boys.

Later in life, John made a complaint about Hartcher and received compensation from the Vincentian Order of Priests. They also paid for John’s ongoing medical treatments related to the abuse from his childhood.

Trustees of the Vincentian Fathers paid out $40,000 to Stannies victim, Bishop Malone puts Hartcher in charge of multiple parishes 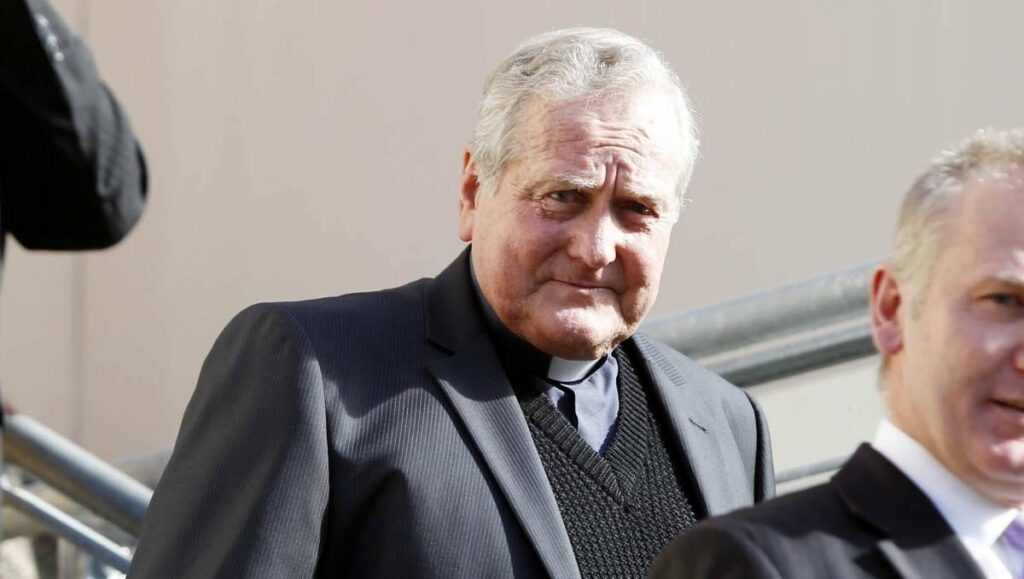 In 1994, the Trustees of the Vincentian Fathers reached a financial settlement with a former pupil of St Stanislaus College known as “Basil”.

In the Deed of Release, Basil said he had suffered loss and damage due to the abuse he experienced at St Stanislaus. He required ongoing specialist counselling and therapy to cope with what happened to him at Hartcher’s hands.

The Fathers agreed to give Basil $43,000. This covered his counselling and legal fees. The Fathers also signed off “without any admission of liability” and were released from further payment claims. Basil could not sue the Vincentian Fathers further and couldn’t ask for more compensation.

The same year, Bishop Michael Malone moved Hartcher from St Francis Xavier Seminary in Adelaide and appointed him the head of the Gresford-Dungog parish in the Maitland-Newcastle Diocese.

Bishop Malone knew about the settlement and the abuse at St Stanislaus College. The Gresford-Dungog parishioners, however, did not.

In 2004, the Newcastle Herald learned about the $40,000 settlement between Basil and the Vincentian Fathers. Bishop Malone realised the abuse allegations would soon go public, panicked, and preemptively released “A Message to Parishioners of Dungog and Gresford Parishes” relieving Hartcher from active ministry.

Bishop Malone did not reference the financial settlement. Instead, he mentioned criminal prosecutions in 1994. Neither of the two prosecutions ended in a conviction and Bishop Malone emphasised Hartcher “maintained his innocence”.

A seemingly innocent message to the parishioners, considering the seriousness of his crimes.

A few days later, Bishop Malone’s message to parishioners appeared on page one of the Newcastle Herald and he defended his appointment of Hartcher.

“I was also given many references in support of Father Guy and his ministry and he was also interviewed by a psychologist of the diocese who spoke to him at length prior to him engaging in ministry,” Bishop Malone said.

“So we were satisfied in the diocese that, with all the other bits and pieces that the Vincentians were able to supply about him, that he was a fit man for ministry. And I personally still believe that.”

Bishop Malone also said he didn’t believe it was his job to tell parishioners about the $40,000 settlement.

“I chose not to inform the people because I didn’t really think that needed to be done and a man was entitled to his own reputation in the eyes of the people,” Bishop Malone said.

“If he chose to tell people, then that was his business about what had happened to him.”

Gresford community divided over the sacking of Hartcher, hold “thanksgiving mass” for him

Despite Bishop Michael Malone and the Maitland-Newcastle Diocese cutting ties with Hartcher in 2004, the Gresford community where Hartcher served decided to hold a “celebration of thanksgiving” mass for him in October 2006.

The Gresford community was divided about Hartcher’s sacking due to his leadership following the suicide of Gresford’s Michael Richardson, who also killed his wife Roxanne and two children, Luke and Grace.

“Guy stood tall and gave direction to a community that was shattered, and I mean totally shattered,” Gresford Congregationalist Reverend Michael McClure said.

“The place stopped, and he was the only person to start the healing process again.”

Half of the Gresford community believed the issues surrounding child sexual abuse should have ended when Hartcher was not convicted in the 1990s.

“There are two different factions in town,” a resident of Gresford told the Newcastle Herald.

Hartcher continued to hold his priestly status long after the Newcastle Herald piece and Bishop Malone’s decision to cut ties with him.

In 2006, Broken Rites received an email from a man in Newcastle who claimed Hartcher conducted a funeral he attended.

According to the mid-2014 edition of the annual Official Directory of the Catholic Church in Australia, Hartcher was still living in a large Vincentian house with eight other Vincentian priests in Ashfield.