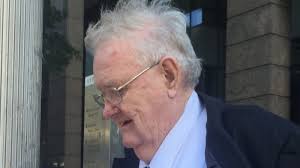 Former Catholic priest of the Archdiocese of Sydney, Robert Flaherty, was a known child abuser. He had multiple victims throughout New South Wales and his peers knew about his sick preference for children.

Rather than reporting him to the police, Flaherty’s superiors moved him from parish to parish.

He should have been punished and imprisoned.

He should never have been given access to more children.

Now, the paedophile priest has three confirmed victims, aged between 11 and 15 at the time of the abuse.

Flaherty was a priest in the Archdiocese of Sydney until his retirement in his mid-sixties. Flaherty was in charge of multiple parishes and continued to live in a presbytery after his retirement, working as a hospital chaplain until 2013 when he was first interviewed by police.

He was an assistant priest at various churches throughout Guildford, Woy Woy, and Auburn. He also served at St Patrick’s Church, Blacktown; St Monica’s Church, Richmond; and Our Lady of the Rosary Church in St Marys.

Flaherty’s victims lived in the parishes he served in throughout Western Sydney.

The first instance of abuse occurred in 1971.

Flaherty was driving a boy home after a youth group session when he stopped the car and assaulted the child. The same child was abused again later in the presbytery.

Traumatised, the child told the Bishop Edward Kelly, who was the assistant to Sydney’s Archbishop at the time. Nothing ever came of the complaint and both Flaherty and Kelly kept their priesthoods for the next forty years.

During later legal proceedings, one of the survivors said Kelly “knew that he had sexually abused a young boy and all he did was move him from parish to parish to give him new young boys to manipulate and abuse without having any restraints put on him.”

In 1977, he abused another child at his holiday house in Mollymook. In 1981, he recreated the same attack. He woke the child in the middle of the night and groped him sexually.

In 2012, Broken Rites told the victim from the 1977 incident to contact the police.

Flaherty pleaded guilty for the two attacks against the first boy and one attack against the third. The crimes against the second child were considered more serious and thus had a stronger punishment. Flaherty fought these charges but was found guilty anyway.

Flaherty was sentenced to a minimum of two years in prison but was eligible to apply for parole after six months. He attempted to appeal his sentence but failed and was kept behind bars.

Flaherty didn’t pay for his crimes until he was 72-years-old. The punishment came thirty – even forty – years too late.