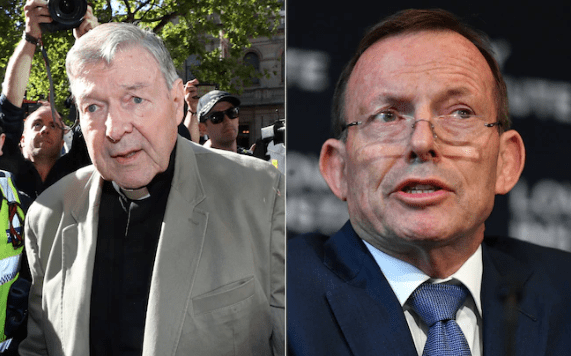 A strong start to December for Tony Abbott: the Former Prime Minister was caught by Seven News leaving the Melbourne Assessment Prison where George Pell is being held.

The Seven News crew questioned Abbott about his visit and Abbott said he was “visiting a friend”. He was also asked about “what spirits” Pell is in, but Abbott refused to answer before getting into a car.

Pell is a friend and former mentor of Abbott. After Pell was convicted of child sexual abuse in February 2019, Abbott told the media he called his old friend as a show of support.

In response to Abbott’s visit, former Former Senator Derryn Hinch said it was a “disgrace and a cruel insult to his victims”.

A 75-year-old Scottish man known as “Harry” sobbed as he described the abuse he experienced in the care of the Australian Christian Brothers at the Scottish Child Abuse Inquiry.

The inquiry was set up to examine the treatment of children who were unnecessarily sent away to Australia and Canada. Many of the children were told their parents were dead.

In the 1950s, Harry was falsely told he was an orphan and sent to live in an orphanage in Western Australia. As he sobbed in court, Harry said he endured years of floggings and sexual abuse at the hands of the Christian Brothers.

Harry lived in Clontarf and Castledare Homes in Western Australia for “four or five years, on and off”. He was forced to perform sex acts on three of the men in the boys’ dormitory.

“If you, in Scotland, knew what happened in Australia you would have started a Third World War,” Harry said.

Harry also spoke about how the boys would be brutally beaten if they didn’t do their chores. He claims he once had a plate smashed over his head because he refused to eat his dinner.

Harry was a teenager when he found out his mother was alive. However, he didn’t get to see her before she died.

Christine O’Neill QC (representing the Scottish Government) told the inquiry it “accepts and acknowledges the very particular role of the state” in the child migration program, which sent more than 3000 British children to Australia. The practice ended in 1971.

“As Scotland’s children they were entitled to the care and protection of the state, including public authorities in Scotland, who facilitated by active complicity or by turning a blind eye to their migration and abuse,” O’Neill said.

“The Scottish government is extremely sorry for the suffering they experienced.”

The District Court in Perth has heard a 41-year-old mother and her 49-year-old husband involved in the “swingers sex scene” offered their two young children to groups of abusers between 2011 and 2015.

The daughter was aged between five and nine, while her younger brother was between four and eight at the time of the attacks.

Their sessions involved up to four adults at a time.

According to the Director of Public Prosecutions, Amanda Forrester SC, the mother was an escort and prostitute, and often brought clients home. The couple would also use drugs like methamphetamine in front of the children, sometimes giving the children some to smoke before abusing them.

The abuse came to light when a member of the public found a camera memory card in a short term rental property. The videos lasted four-to-six minutes each and adults could be heard talking telling the young girl to relax, and that she’s “definitely her mother’s daughter”.

In police interviews, the girl said her stepfather would also show her pornographic videos.

The mother pleaded guilty to 40 charges against her daughter, but the stepfather maintained his innocence and preparations were made for the girl to pre-record her evidence.

The step-father eventually pleaded guilty to the 40 charges and admitted a charge of engaging in sexual conduct with his biological daughters when they were aged between four and seven.

The couple will see the court again in March 2020.