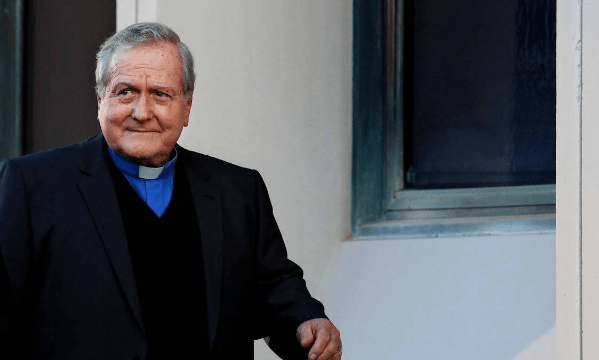 Michael Malone became the Catholic Bishop of the Maitland-Newcastle diocese in 1995. At the time, there were two notorious paedophile priests working beneath him – Denis McAlinden and Jim Fletcher.

McAlinden was an active paedophile from the 1940s to the 1980s. He abused more than 20 underage girls – one survivor was abused from the age of four to thirteen. McAlinden befriended her parents to avoid suspicion.

Rather than being punished, McAlinden was moved from parish to parish and state to state. He was given more opportunities to abuse children throughout Australia when he should have been locked up.

He died in 2005 without being punished for his crimes.

Fletcher started abusing children in the 1970s. Like McAlinden, Fletcher befriended the children’s parents and attended dinner parties so he could abuse their children in their own homes.

He lived in an apartment with the Archbishop of Adelaide Philip Wilson and often brought children home with him. One of Fletcher’s victims swears the Archbishop knew about the abuse but chose to do nothing.

Their victims could have lead normal lives if it wasn’t for Michael Malone’s failure to report these paedophiles. He knew about Fletcher and McAlinden’s abusive behaviour. He had to make a choice: report the abuse and protect the children of the Maitland-Newcastle diocese or protect the church.

Malone chose to protect the church.

From the moment he was appointed as bishop in 1995, Malone was forced to deal with “quite explosive local problems of historical abuse” and was out of his depth in regards to child protection. Rather than dealing with the issue of child abuse in the church, Malone turned a blind-eye to complaints against McAlinden.

Malone was overwhelmed. He didn’t know what to do. This was not the bishop’s job he thought it was going to be. Rather than attending to the pleasant ceremonial duties he was suited for, he found that every day it was like ‘driving an ambulance’ and trying to put out fires. His Diocese was infested with sex abuse scandals. Many of his priestly peers were a disgrace and they made his job unbearable. Malone was uncomfortable with the subject of sex. He was completely out of touch. He just wanted to avoid the whole subject.

“The whole area of sexual abuse is so distasteful that I would have found it unpalatable,” Malone told the NSW Special Commission of Inquiry.

Both priests were later jailed.

Malone served as bishop for sixteen years until he requested early retirement. He claimed to be exhausted from managing the constant struggle with abuse in the church. In 2016, he told the commission that it got to the point where “you either had to try to defend the church or you had to try to serve the needs of survivors and I chose the latter”.

Royal Commission Chairman Justice Peter McClellan responded with “why was it ever a choice?”

Malone went on to appear before the commission twice – once in 2013 and again in 2016. He was questioned about Jim Fletcher, Denis McAlinden and a third paedophile priest named Vince Ryan.

Ryan was charged in 1955. Malone admitted the church knew “an awful lot more” about the paedophile’s crimes than it was forced to concede.

Malone also revealed that bishops keep secret archives on priests and every year, documents involving criminal cases and concerning immoral matters are supposed to be destroyed. Malone chose not to get rid of the documents but he joked that “perhaps [he] should have.”

“I might not have been in this room if I had destroyed them,” Malone said, outraging multiple victims of abuse.

People like Malone are the reason child sexual abuse occurs to this day. Malone knew about abuse in the church but he chose not to confront the priests under his control.

He wanted to avoid conflict with priests. He wanted to brush his problems under the carpet or flick-pass his responsibility onto someone else.

He was out of his depth and refused to act. He lacked the courage to truly care for the victims. He preferred to protect the reputation of the Catholic Church. This is exactly how paedophiles are allowed to continue abusing children and ruining innocent lives.

We refuse to let people like Malone, McAlinden and Fletcher get away with their crimes.