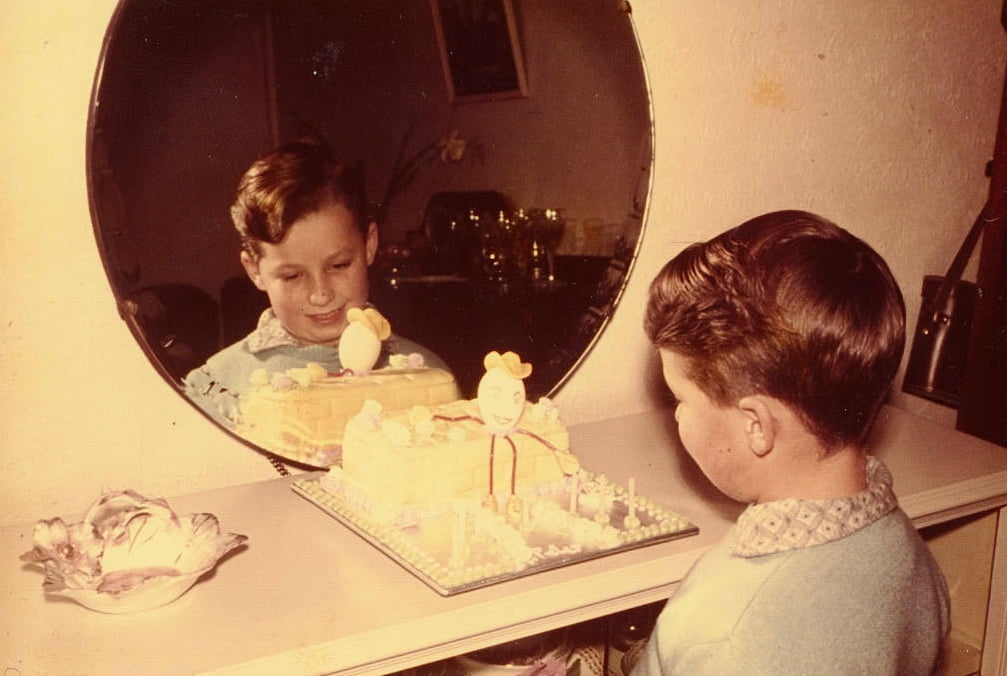 Image: Me on my sixth birthday

This is part three of my series on my childhood as a ward of the State. If you haven’t read the previous articles you can check them out here – Part One and Part Two.

Warning: Some of the content below is graphic and may upset some readers.

My foster parents were always strict and unrelenting.

I expected nothing else.

But not everything about my childhood years was bad.

On two days they loosened the leash.

Those were the same two days every year – my birthday on 12 June and on Christmas Day.

On those two days, they never would hit me.

It was truly wonderful.

For all their misgivings, Aunty and Uncle gave me lovely presents for my birthday and on Christmas Day.

They went to a lot of trouble.

Aunty made special food to eat, like mini frankfurters, meat balls and fairy bread. It was party food just without the party. They never gave me a party. I don’t know why. Parties were nowhere near as common back then as they are today.

I was only ever invited to one party.

Phillip was a boy from my class at Gladesville Public School. It was a big party. Lots of kids from school were invited.

I was so excited, counting down the days.

When Saturday came I was turned away at the door by his mother as poor Phillip had caught the measles and was highly contagious.

You have no idea how deflated I was.

It was a long walk home.

The only other party I attended was when young Kim who lived behind the back fence was having a party one day. The shindig was in full swing when his dad called out and lifted me over the fence to join in all the fun.

I got over-excited and was sent home for throwing sand at the birthday boy. The sand got it in his eyes and the tears started to flow. His mother walked me inside the house. Kim was having a bath. I apologised. They were all quite nice about it.

Everyone had to leave and I was in disgrace with Aunty and Uncle. It was the first time I’d ever seen a sandpit.

I couldn’t take a trick, so to speak.

Meanwhile, the beatings with the feather duster never let up.

Aunty also used to slap me with her hand across my face in a downwards motion. She called this ‘slapping me down’.

I would crumple to the floor so she couldn’t reach my head. When she’d say, “Do that again and I’ll slap you down” I knew exactly what was coming.

One day, after another beating in the backyard, I snapped back at them, “You only got me so you can hit me.” I really meant it.

Aunty reeled at this and hit me again.

I was getting very close to cracking point. I was sick and tired of getting hit all the time. I didn’t know what to do. I felt helpless. There was nobody I could talk to.

One day in the house I remember feeling quite desperate. It’s the feeling when you know nothing is going to change. Nothing was going to get any better. I was trapped and there was no way out.

I knew I was just going to have to put up with it year after year. I went to my bedroom and closed the door. There was my little single bed with its blue chenille bedspread.

Next, I did something I’d never done before.

I knelt down beside the bed with my back to the window.

I put my hands together and asked God to help me.

I didn’t know anything about God.

I prayed beside my bed many times after that first silent prayer.

I felt better when I asked God for help. So I kept doing it. Now I’m grown up and when I look back on my life, I realise how blessed I have been in so many ways. All I can think of is God heard my call for help and had His hand on me. God protected me even though I didn’t know it at the time.

There was one instance when I began feeling truly affected by my abuse. That day was a turning point in my life.

I was still in primary school. I was 11 years old in 5th class and my teacher was the no-nonsense Miss Gaunt. At one time of the year, we did a Social Studies project on Switzerland. We learned about the Swiss Alps, the lakes, the yodelling, the chocolate and the schnitzels.

I planned to wait till I was 18 when Aunty couldn’t stop me. Then I would go and live in Switzerland and start a new life far away from Aunty and Uncle. So far away they couldn’t find me ever again.

I began to dwell a lot on the negative.

Dark thoughts invaded my mind. I even welcomed them. The thoughts were comforting. I hated my foster parents.

I began to think about how much I hated them. I hated them and I hated their blood. I wanted them dead and out of the way.

In my mind, nothing else was more fitting – they deserved to die. They had hit me so much and wouldn’t let me see my brothers. I was sick of being hit and I was sick of them.

I began to think of how I could end their lives.

I knew murder was the worst thing you could do. But I was a bad person. I was a creature – they had told me so year after year. Nothing was going to change. I may as well have some chance at freedom and happiness, even if I was a creature.

I enjoyed the thought of killing them and then later pretending to the police I didn’t do it.

I wouldn’t miss them at all. No one would.

They had no children of their own.

Uncle had even stopped talking to me from when I was ten years old. He had nothing to do with me. I hated him and his bald head.

I was just going to return his hatred, and get some of my own back.

I had stewed over their demise, again and again. I was trapped in this miserable cycle of abuse, and it was all because of them. I plotted their murders in my bedroom, spinning the web of methods and alibis which would end in my freedom.

First, there was the location.

They were always home together so I would have plenty of opportunities to kill them at home.

But then there were the bodies. How was I going to dispose of the bodies?

In those days dead bodies were often found buried in shallow graves in the Royal National Park, just out of Sydney.

Where I lived in Gladesville it was nowhere near the Park. And I was too young to drive. Or strong enough to dig a big hole. The first option was scrapped.

My only option left was slow poisoning. I had heard of arsenic. But I didn’t know where to get it. And I had no money. Aunty didn’t believe in pocket money.

So there I was, trapped and without the means to commit a perfect murder. I had to desert the idea and move on.

I graduated high school, then university.

I became someone who was capable of love and achieving great things. I forgave them many years ago.

When I talk about it now it is only history and facts. There are no bitter feelings attached. I don’t have murderous thoughts anymore.

When I left home I developed an adult relationship with them. I didn’t feel attached to them, but I kept in touch out of a sense of duty.

Uncle died first. I looked after Aunty in her old age till she died in early 2008. I conducted her funeral. I did everything properly for her. I had their ashes placed side by side at the memorial garden.

Child abuse is a harrowing, tragic and mentally brutal ordeal. The dark times seem never-ending, but there’s always a way out.

You can find love, hope and happiness. You have to. There’s no other way. Bitterness has to be dealt with. Or it will eat you up from the inside out.

If you were abused as a ward of the State, add your name to Peter’s list. I am determined to see abused wards of the State receive compensation for the trauma inflicted by their caretakers.