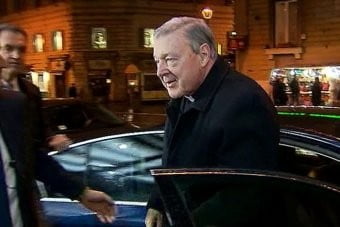 Climbing the ranks into the Vatican – how Australian Cardinal George Pell went from a small-town football player to the Vatican’s third in command.

1941 – George was born in Ballarat Victoria, to a strict Catholic mother and heavyweight boxing champion father.

It must be noted here that throughout his time at Corpus Christi, Pell was known as a straight shooter, a man who had strong opinions and had the intellect and vernacular to verbally destroy anyone who had more liberal or contentious opinions.

1963 – Studied at the Pontifical Urbaniana University in Rome. It was here his connection with Rome began.

1966 – Pell was ordained as a Catholic Priest. He studied church history at Oxford, achieving a doctorate.

1972 – Pell returns to Ballarat. He starts out as an assistant parish priest in Swan Hill. He continues his education in Melbourne, earning a Master of Education.

1973 – Pell lives in the St Alipius presbytery. This is where he was living with Gerald Ridsdale. St Alipius was a hub for many paedophile priests including Robert Best, Edward Dowland.

The Royal Commission heard that in 1971 every male teacher (including the chaplain) were molesting children in this school.

It is very likely the abuses were continuing throughout Pell’s time in St Alipius.

1973-1984 – Pell serves as Episcopal vicar for education in the diocese of Ballarat.

Throughout this time, paedophile priest Peter Searson was abusing students at the Holy Family School. One such student was Julie Stewart, who in 1996 received a letter from Pell acknowledging and apologising for her suffering at the hand of Searson.

In his role of Episcopal vicar, Pell would have known about Searson’s abuses against children.

It was also in this time that Emma and Katie Foster were being abused by Father Kevin O’Donnell. It was later proven the Catholic Church knew O’Donnell was a paedophile.

In 1982 Gerald Ridsdale was in Mortlake and had a young boy (Paul Levey) living with him at the request of the boy’s father. This young boy was raped daily, and Pell was aware of the living situation.

1987 – Pell is ordained as the Auxiliary Bishop of Melbourne. He was serving under Archbishop Frank Little.

2007 – Appointed to Council of Cardinals on Organisational and Economic Problems of the Holy See.

2013 – Appointed by Pope Francis to a group of eight cardinals to advise on the government of the universal Church and study plan for revising Apostolic Constitution of Roman Curia.

2013 – Gives evidence to the Victorian parliamentary inquiry into the handling of child abuse by religious and other organisations in Melbourne.

February 2014 – Appointed as Prefect for Secretariat for the Economy.

March 2014 – Gives evidence to the Royal Commission into Institutional Responses to Child Sexual Abuse in Sydney. This was in relation to the legal case of John Ellis.

August 2014 – Second Royal Commission appearance via video link from the Vatican regarding the Melbourne Response.

Pell refused to fly back to Australia to face the Royal Commission due to medical reasons.

29 June 2017 – Charged with historical child sex offences. He will have to appear in a Melbourne court on July 26.

October 2017 – Pell faces court for the committal hearing date to be set.

14 March 2018 – The committal hearing is reopened to the public and media after eight days of evidence in closed court.

15 August 2018 – The cathedral trial begins. Due to a suppression order applied on the 15th May, journalists were unable to report on the case.

13 September 2018 – The jury hears the final directions from judge Peter Kidd after hearing the final evidence.

11 December 2018 – The jury returns a unanimous guilty verdict. Pell was charged with one count of sexual penetration of a child under the age of 16 and four counts of committing an indecent act with, or in the presence of, a child.

26 February 2019 – The media suppression order has been lifted from the case after charges were dropped from a second case, involving indecent assault on two boys in a Ballarat swimming pool.

13 March 2019 – George Pell’s sentencing hearing is recorded and live-streamed. He has been sentenced to six years’ jail time, with a non-parole jail period of three years and eight months. He will be 80 by the time he can apply for parole.

Pell rose through the ranks because he was fiercely intelligent and was an undeniably hard worker, defending the Church and papacy against liberal ideals and making himself indispensable to Rome.

If one thing is certain, it’s that Pell had many fingers in many pies. He was everywhere at once and held many positions across various dioceses. He consulted with paedophile enablers such as Frank Little and Bishop Ronald Mulkearns.

It is hard to accept that Pell was not aware of the horrific abuses occurring within his own archdiocese.

It is also hard to believe a man with the intellect and ego of Pell’s could be ignorant of the horrors being committed by people he once lived with.

If you are a victim of institutional or clergy abuse, contact us today. We would like to help.