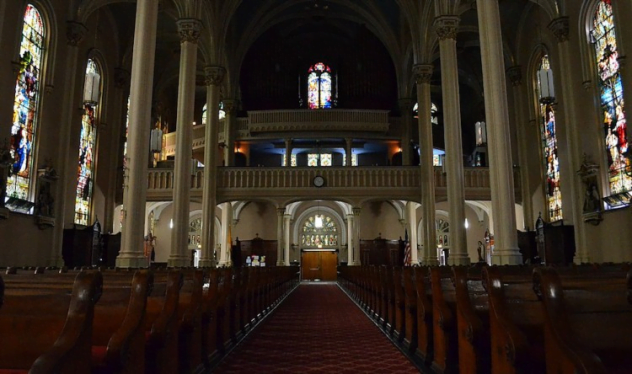 Searson paid the boy a pittance to do chores around his home and told the boy the sexual abuse was the devil punishing him for his sins.

Searson was known to carry a gun and a large knife which he once held to a child’s chest.

Searson’s out-of-control behaviour was never seriously investigated and he died in 2009 without facing child abuse charges.

The local bishop at the time was George Pell who later became Archbishop of Melbourne then Cardinal.

Last month, vandals scrawled graffiti critical of Pell across the walls of Melbourne’s Archdiocese building and the County Court building, where the Cardinal is due to front the Royal Commission on 14 December. The graffiti was swiftly painted over.

Hillsong Church’s founder, Brian Houston, has come under criticism at the Royal Commission for failing to report to police that his father, Frank Houston, had molested young boys in the 60s and 70s before Hillsong was established.

2021 UPDATE: Brian Houston has been charged with concealing child sexual abuse within the Hillsong Church. Houston’s lawyer was served a court attendance notice in August 2021 after a two-year investigation into the case.

Houston has said he is shocked “given how transparent I’ve always been about this matter.”

He has also suggested that his father’s victim, who is now an adult, should have been able to make up his own mind about reporting the abuse to the police, supporting Hillsong’s claim that Houston “acted appropriately”.

Houston is expected to appear in court on October 5th 2021.

The Federal Government was considering holding another Royal Commission after a Senate committee reported widespread violence against people with disabilities.

If a Royal Commission was to go ahead, it would be the fourth such inquiry in just three years.

In the meantime, the Child Abuse Royal Commission urged any victims of sexual abuse at The Kings School in North Parramatta, NSW, and Tudor House Prep School in Moss Vale to contact the Commission on 1800 099 340.

No public hearings into these schools have yet been announced.