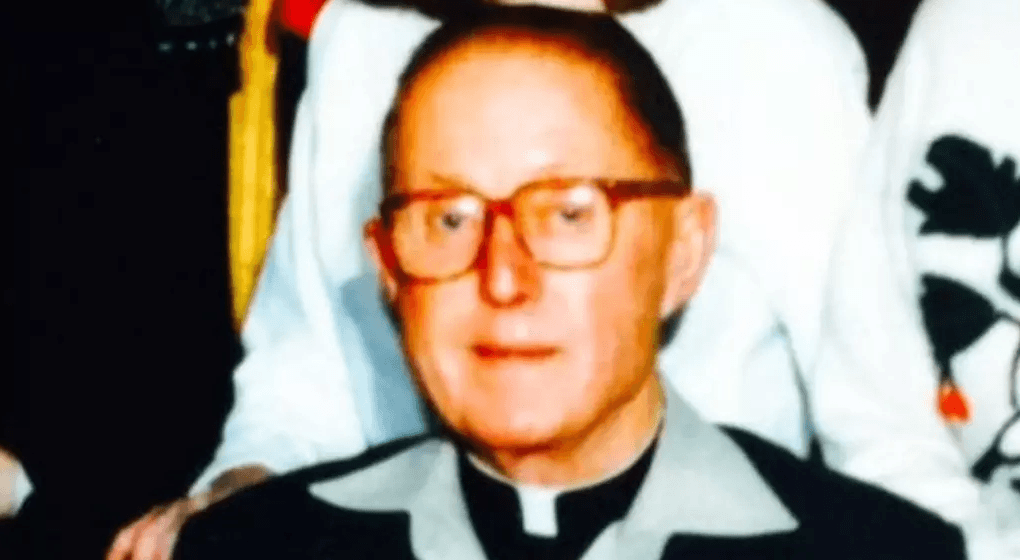 There have been some horrific stories of child sexual abuse from the Catholic Church… but none so disturbing and nightmarish than that of Father Peter Searson.

Searson had a sick fetish for children.

He would make them kneel between his legs during confession and record the stories he found most titillating.

He loitered around the children’s bathrooms and made them touch his penis whenever possible.

He once terrified year 12 students by pointing a gun at them.

He killed animals in front of the children and showed them dead bodies in coffins.

Father Peter Searson was a legitimate psychopath with an insatiable appetite for abuse, murder, and rape.

He was moved around to three Melbourne Catholic Archdiocese parishes and was the fourth paedophile priest sent to Doveton Parish, following Father Thomas O’Keeffe, Father Wilfred Baker, and Father Victor Rubeo, creating an unbroken chain of abuse throughout the 1970s, 1980s, and 1990s.

Father Peter Searson’s crimes started when he joined the Our Lady of Carmel Sunbury Parish in 1977.

One of his first victims – an altar boy known as BVD – told the Royal Commission Searson started raping him when he was just 9-years-old.

Searson would force the child to wash his car and mow his lawn, then proceeded to rape him. This happened every weekend for six months.

“Searson threatened me, telling me I would go to hell if I told anyone,” BVD said.

“I was terrified. The only person I was more scared of than Searson was my mother. There was no way I could tell her what was happening.”

Searson was moved to Doveton Holy Family Parish in 1984 where he continued to abuse children. He made girls sit on his lap during confession and repeatedly abused a nine-year-old girl in confession throughout the 1980s.

Another victim, Julie Stewart, told the commission she was abused and received an apologetic letter from Cardinal George Pell in 1998, acknowledging the abuse.

However, in 2013, George Pell backpedalled and stated: “no conviction was recorded for Searson for sexual misbehaviour – there might be victims…”

The former principal of the Holy Family School, Graeme Sleeman, quit in disgust after the parish was left unprotected from Searson by the Catholic Church.

“In all my life, I have never been frightened of anyone,” Sleeman told 7:30.

“Peter Searson scared me because he was a really, really creepy guy.”

The Royal Commission into Institutional Response to Child Sexual Abuse heard about Searson’s intimidation tactics i.e. killing animals in front of children. He once killed a bird with a screwdriver in front of a group of children and threw a cat at a fence by its tail, killing it.

The Commission was also told that Searson terrified students with a gun when he was parish priest at Doveton in the 1980s.

The students were from the local high school and were working as cleaners at the school. Searson brought a gun to the school and intimidated them mercilessly.

Monsignor Thomas Doyle, the former director of Catholic Education at the Archdiocese of Melbourne, admitted being alarmed about the accusations but did nothing about them.

In 1990, Searson was convicted for hitting a small boy in the parish but was never punished for the rape and abuse of other children, plus the relentless abuse of animals.

He died in 2009 without ever being recognised for what he was – a horrendous monster.

Searson was a sick, disturbed paedophile with no sense of remorse for his actions. He got a thrill out of scaring women and children.

The Melbourne Catholic Archdiocese knew that Father Peter Searson was committing these crimes and moved him three times before parents petitioned to get rid of him. He survived years under the regional bishop, Auxiliary Bishop George Pell.

The Royal Commission worked hard to expose criminals like Searson.

Now is the time to strike out against child abusers and send them to a hellish prison where they belong.