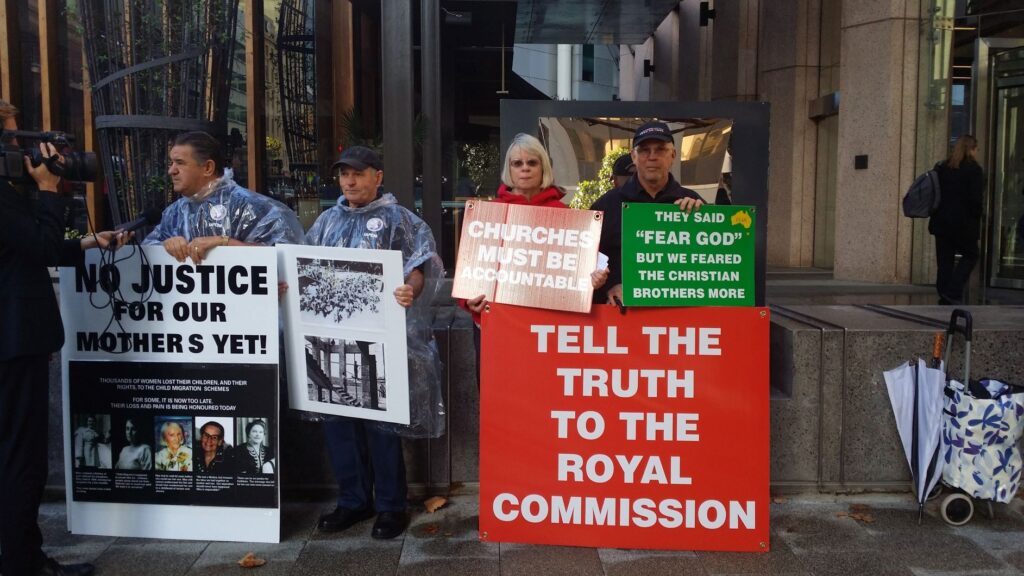 Some of the worst cases of historical child sexual abuse in Australia occurred at Castledare Junior Orphanage and St Vincent’s Orphanage Clontarf in Western Australia.

After World War II, thousands of children living in Children’s Homes were sent to Australia from England to escape the Cold War in Europe.

Some of the children were excited for the “adventure” of moving to Australia where there were wide open spaces and kangaroos. They didn’t know they were going to be used as free labour on isolated farms run by sadistic Catholic Brothers.

Some of the children were orphans and had no choice but to go.

Following the Royal Commission into Institutional Responses to Child Sexual Abuse, the Catholic Church revealed the number of child sexual abuse claims that were made against staff members from their religious schools and orphanages.

Castledare and Clontarf were among the worst offending institutions in Australia with 142 and 152 allegations, respectively.

The children at Castledare Junior Orphanage and St Vincent’s Orphanage in Clontarf were beaten, bullied, and subjected to brutal sexual abuse on a regular basis. Priests and staff members took it upon themselves to live out their monstrous sexual fantasies on innocent children who had nowhere to run and no one to turn to.

In this article, we shine a light on the Castledare and Clontarf Orphanages, and share the stories of brave survivors who had the strength to stand up during the Royal Commission.

Twin brothers abused at Castledare couldn’t show each other affection

John and Arthur Wells lived at Castledare Junior College when they were children. In 2014, John submitted evidence to the Royal Commission about their shared experience and how the Christian Brothers would single out vulnerable children and “they enjoyed seeing a child cringing and looking terrified”.

“Their objective almost seemed to be to break the child’s spirit,” John told the Commissioners.

In adulthood, the twins felt worthless and had issues with low self esteem. John struggled with an alcohol addiction. The brothers could never show each other affection – it triggered memories of the sexual abuse they experienced in childhood.

Arthur died in 2014 a few short months before John stood before the Royal Commission.

“When Arthur was in hospital, I held his hand for the first time in 70 years,” John said.

“It makes me sad that he died with all these horrible memories and restrictions on his life.”

John and Arthur were twin brothers. The two men should have had a natural and close connection to one another.

The Christian Brothers of Castledare Junior Orphanage ruined that for them.

Another survivor of Clontarf and Castledare, Oliver Cosgrove, was born in London in 1949. He was placed in care as an infant and moved around to different orphanages and care facilities, before he was approved to be sent to the Sisters of Mercy in Wembley, Western Australia.

In 1956, he was sent to Castledare Junior Orphanage.

Oliver told the Royal Commission about the beatings he experienced on a regular basis. The Christian Brothers beat the children with a leather strap or sometimes a wooden cane.

The Brothers were cruel and indiscriminate. Oliver said the boys would compare the number of times they had been beaten by tearing a tooth out of their hair comb.

But it didn’t stop with the beatings.

Oliver recalled waking up one night with one of the Christian Brothers sitting on his bed and fondling his genitals. The Brother, James Randall Murray, asked Oliver if he’d ejaculated.

Oliver was confused – he didn’t know what “ejaculation” was.

He was eight-years-old at the time.

Sometimes, Oliver would wake up and not be in his bed. One night, he woke up in the Castledare dining room. It was dark and he could see a silhouette of a man leaving the room. Oliver didn’t know who it was and around this time, Oliver started bedwetting.

Bedwetters at Castledare were known as “sailors”. It seemed to stop the Christian Brothers from visiting him in the night.

Oliver also told the Royal Commission about the sexual abuse he experienced at the hands of Brother Angus at Clontarf. The Christian Brother would come up behind Oliver, put his hands on the child’s shoulders and start rubbing himself against Oliver’s back and buttocks.

He said this happened everywhere, even in the company of other boys. It happened three or four times before Oliver “became a bit savvy” and hid when he spotted Brother Angus in his peripheral vision.

In the 1980s, Oliver started having vivid flashbacks to the abuse he suffered at Castledare. He went to see a therapist who described his bedwetting as a defensive mechanism.

The therapist also said Oliver’s problems remembering what happened in the dining room was a coping mechanism.

Another survivor named Albert McGregor told the Royal Commission about how Brother Lawrence Murphy would wake him up in the middle of the night at Clontarf and take him to his bedroom.

Following the abuse, Brother Murphy would threaten Albert into keeping quiet about what had happened.

John and Arthur Wells had a similar experience at Clontarf. John told the Commissioners being taken to a Christan Brother’s room was “pretty much a nightly occurrence, or at least it occurred more often than not”.

Now suffering from leukemia, heart disease, and diabetes, Mr Lawrence was raped multiple times when he was just 9-years-old. Like Arthur and John, Mr Lawrence remembers Brother Murphy walking through the dormitories at night and choosing children to take to his room.

“We would all put our heads under the blanket because we knew what was going to happen,” Mr Lawrence said.

“He was a terrible man… if I told him to stop, he’d slap me across the face.”

“In the classroom, you’ve got Murphy trying to teach you and that’s the same man that raped me the other night. I used to look out the window… I didn’t want to look at him.”

“By the time I left that school, I didn’t know anything.”

Reports of child abuse considered an “attack on the church”

Another victim, Albert McGregor, was first abused when he was eight years old. The abuse was sexual and psychological in nature.

Albert didn’t realise what was happening to him as a child but as he moved into adulthood, he started to realise what the Christian Brothers had done to him. His innocence has been disrespected, stolen and abused.

Albert became angrier as the years went by.

Despite what happened to him as a child, Albert became a Christian Brother. In the 1990s, he decided to look into the sexual abuse that occurred at Castledare, along with various other Christian Brothers orphanages and homes.

He discovered child abuse was rampant among the Christian Brothers.

Albert reported his findings to senior members of the Christian Brothers, but he was ignored.

“They didn’t see me as a victim but saw what I had done as an attack on the church,” Albert told the Royal Commission.

No one stood up for them as kids. No one was there to help or protect them.

The Council could have done something.

They chose to ignore their pleas for help for the good of the church.

Following the 2015 commission, the Christian Brothers were forced to re-examine 130 settlements and review settlements that were “unreasonably low”. Half of these settlements received an increased payment.

In 2014, the Royal Commission handed down its findings regarding the widespread physical and sexual abuse at Castledare Junior Orphanage, St Vincent’s Orphanage Clontarf, St Mary’s Agricultural School Tardun, and the Bindoon Farm School.

The Commissioners heard harrowing stories of abuse from 11 survivors. 16 Christian Brothers were named. Four were charged and one was jailed.

When the Commissioners handed down their final report, they determined between 1919 to the 1960s the Christian Brothers Provincial Council knew about the sexual abuse allegations in their schools, homes, and orphanages.

The Commissioners also found between 1947 and 1968, the Christian Brothers who managed these institutions had failed to prevent further emotional, physical, and sexual abuse from occurring.

The Christian Brothers and the Western Australian Government had the chance to intervene. Several children could have avoided a lifetime of pain and suffering. No one helped and the children had nowhere to go.
At Kelso Lawyers, we’re here to support survivors of child abuse to stand up against their abusers and achieve compensation for decades of pain. Our compassionate and experienced team can help.