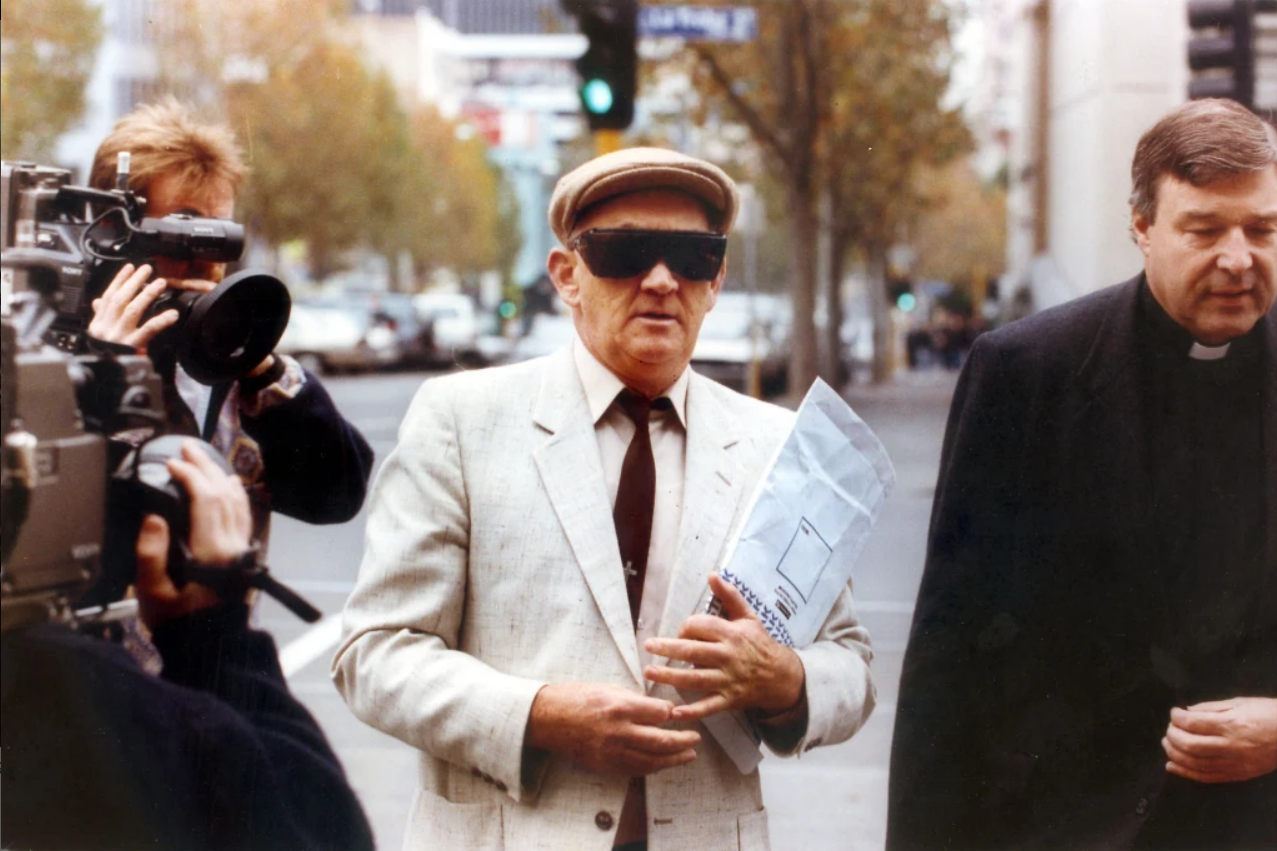 Gerald Ridsdale is Australia’s most prolific paedophile priest. Over the years, he has received over 100 child sexual abuse charges and has 69 known victims.

Ridsdale physically and sexually abused his victims, causing long-term mental and physical issues. One victim attempted suicide while in his care at the Nazareth House Girls’ Home, and now, many survivors suffer from ongoing mental illnesses and substance abuse. Others have traumatising flashbacks and post-traumatic stress disorder.

No child was safe from Gerald Ridsdale. In this article, we expose the life and crimes of Ridsdale, who has been sitting behind bars since 1994.

Ridsdale grew up in Ballarat and started abusing boys as early as 1955 when he was 21 years old. He was ordained at St Patrick’s Cathedral in Ballarat in 1961. He received his first complaint the same year.

He was moved around to various different schools, parishes and institutions to avoid prosecution — in 1971, he worked at St Alipius Primary School in Ballarat as a chaplain, and then at Apollo Bay from 1972 to 1973. In 1976, he was moved to Edenhope and then the National Pastoral Insitute in Elsternwick, Melbourne.

In 1981, he was moved to Mortlake, then transferred to Sydney, and then New Mexico for “treatment” for his paedophilic desires in 1990. After nine months overseas, he was appointed chaplain at St John of God Hospital in Richmond, NSW.

Cardinal George Pell told the Royal Commission that transferring assistant priests to various different locations was common practice, but the frequency of Ridsdale’s transfers was “unusual”. His appointments were short, with an average of 1.8 years per appointment.

It has been said that Ridsdale was sent to a psychologist as early as 1971, but Bishop Ronald Mulkearns said he had no idea that Ridsdale was a paedophile until the priest was in Inglewood, VIC. This was proven false by Operation Arcadia, a three-month investigation into how much Mulkearns really knew about Ridsdale’s crimes.

In September 2019, the Diocese of Ballarat also released a statement admitting that the high-ranking clergy members (including Cardinal Pell) knew about the sex abuse claims against Ridsdale and tried to spare him from prosecution.

Wherever he went, he found children to torment and traumatise. He now has 69 known victims.

Ridsdale said he was “out of control” abusing children in Mortlake

In an interview with a Catholic Church insurance investigator in 1994, Ridsdale claimed he was “out of control” when he worked in Mortlake, a town with just 1,000 residents.

“I got out of control again. I went haywire there. Altar boys mainly,” he said.

“It was no secret around Mortlake eventually about me and my behaviour; there was talk all around the place amongst the children, and one lot of parents came to me.”

It has been said that Ridsdale abused every boy at St Colman’s School during his 18-month stint there. Almost every family was touched by his relentless crime spree. No one was truly safe from his disturbing interest in children.

Ridsdale would lure children into the presbytery with video games and other fun activities like table tennis. He even asked the principal if the year five and six boys could go to the presbytery during lunchtime. He also befriended the boys’ parents and formed bonds with their families — “he drew the children in, and he loved the children, and he visited families and played with them,” a peer said.

One of the boys from the school ended up living with Ridsdale after his parents separated in 1982. Ridsdale had already sexually assaulted him on a camping trip, but the boy’s father decided it would be best for his son to live with Ridsdale after the separation.

He was even forced to sleep in the same bedroom as Ridsdale.

The child was raped almost every day.

After Mortlake, Ridsdale was moved to an administrative position in Sydney and Horsham in Victoria between 1986 and 1988. He had asked Bishop Ronald Mulkearns if he could step down from parish work “so that I may be removed from the kind of work that has proved to be a temptation and a difficulty for me”.

However, Bishop Mulkearns said that would be inappropriate and replied, “I have every hope that nothing more will eventuate, but we have to do our part to ensure that it does not”.

“I desperately want to stop surviving and start living”

The courts have heard countless horror stories about Ridsdale over the decades. One survivor said Ridsdale abused him in the confessional box in Ballarat and was told he was being punished for losing his jumper. He was also told God would punish his whole family if he told anyone about the abuse. The child was nine-years-old at the time.

The survivor blamed himself for the abuse because the older boys warned him not to get caught alone with Ridsdale. Now, he suffers from severe depression, anxiety and post-traumatic stress disorder and has suffered an estimated 4,500 nightmares since the abuse occurred (three to four nightmares per week).

“Being in survival mode all the time is no way to live”, he said. “I desperately want to stop surviving and start living.”

Another survivor was taken to Ridsdale to be abused between the ages of eight and 10. She said “she thought it was never going to stop”, and on one occasion, she was assaulted on the altar of a Ballarat church. Ridsdale told her she would be a “good girl” if she didn’t tell anyone, whereas another survivor was tipped $1.50 after the abuse for “being good”.

Two victims were brothers. Both were abused and then taken rabbit shooting — now, the older brother has frequent flashbacks to the sound of Ridsdale’s footsteps heading towards his bedroom.

“The sound of squeaking floorboards causes me extreme anxiety,” he said.

Outside a courtroom, the boys’ elderly parents said:

“We trusted our beautiful, innocent children with this bastard without question when we should have been more vigilant on their behalf.”

In March 2022, Ridsdale faced court on fresh charges alleging he abused two boys in 1981 and 1982, respectively. He appeared at Warrnambool Magistrates Court via video link from prison after being charged with 24 new offences, including 10 counts of sexual penetration of a child aged between 10 to 16.

In July 2022, the prosecution withdrew 11 charges during proceedings. Ridsdale pleaded guilty to the remaining four counts of indecent assault and nine of sexual penetration of a child.

He would have been eligible for parole in 2025, but now he is due to appear at the County Court in Warrnambool for sentencing in September 2022.

He currently suffers from chronic health problems, including heart conditions, arthritis, bowel problems and high blood pressure. At 87 years old, he will likely die in prison.

While 69 victims of Ridsdale’s abuse have come forward, he estimates that there are more likely hundreds of victims out there.

If you believe you have been abused by paedophile priest Gerald Ridsdale or any clergy member, we want to hear your story. Our lawyers have helped hundreds of institutional abuse survivors to achieve compensation and a formal apology from the Catholic Church. We’re with you every step of the way.